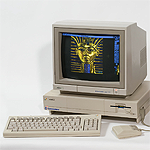 The most exciting computer that I ever owned, and certainly one of the most significant in the history of personal computing, is the Amiga 1000, the first Amiga model release by Commodore in 1985. It was so far ahead of its time that almost nobody – including Commodore’s marketing department – could fully articulate what it was all about.

I still remember a friend of mine, a “proud” owner of a “serious” PC, asking me what use would thousands colors be of on a computer, what importance could possibly have things such as real-time animation or stereo sounds, or what has music to do at all with computers! Today, it’s obvious the Amiga was the first multimedia computer, but in those days it was derided as a game machine because few people grasped the importance of advanced graphics, sound, and video – everyone else was of the idea that a COMPUTER should only feature a 4-colors text-based interface and be used just for spreadsheets and word-processing…

The Amiga was a revolution in every aspect. It could display 4096 colors and had custom chips for accelerated video. It had built-in video outputs for TVs and VCRs. It had four-voice, sampled stereo sound and was the first computer with built-in speech synthesis and text-to-speech conversion. And it’s still the only system that can display multiple screens at different resolutions at the same time on a single monitor. Moreover, the operating system was a true UNIX-like preemptive multitasking 32bit one, coupled with an advanced graphical user interface to tie it all together.

Programming it was a real challenge! The Amiga required me to learn brand new concepts such as multitasking and concurrent programming, resource arbitration through microkernel I/O interfaces, interprocessing messaging, GUI design and programming, multimedia (animation, digital audio processing) and 3d programming… It was really hard to learn and master all that stuff – especially if you’re just 14 years old! – but those days forged me and teached me how to face modern IT challenges, how to solve them without too many problems. I owe a lot to that wonderful piece of technology!

Unfortunately, we may never see another breakthrough computer like the Amiga. Technology that breaks clean with the past is increasingly rare, and rogue companies like Commodore that thrived in the frontier days just don’t seem to fit anymore.