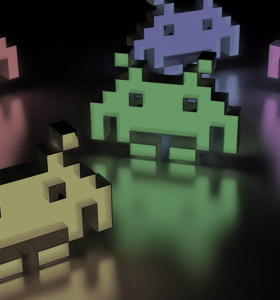 I’ve always been fascinated by videogames.

Maybe this is because I was very young, when I saw my first coin op; it was Space Invaders, from Taito. I was used to TVs, of course, but I was simply amazed by those little creatures moving on the screen: they were alive and kicking, they were interacting with you, the player, they were fighting back and you cannot simply sit down and watch – you had to act, quickly, to avoid being overwhelmed and defeated, moving another little sprite on the screen that was following your orders!

Developing videogames is both a fine art and a science. On the one hand, it gave me the possibility to unleash my creativity, especially in the computer graphics and electronic music fields. On the other, mastering assembly language, C/C++, complex OOP analysis and design was just the bare minimum, I had to learn physics (mechanics, global illumination, cfd), advanced math, artificial intelligence, digital signal processing, just to name some of the many skills required by the multidisciplinary challenge of crafting a videogame. All in all, even if I cannot consider myself one of the best programmer in the world, I can state for sure that I’m far more skilled than the “standard” guy who spends his life developing just ERPs and databases!