Computer simulation is an attempt to model a real-world process or system over time on a computer. 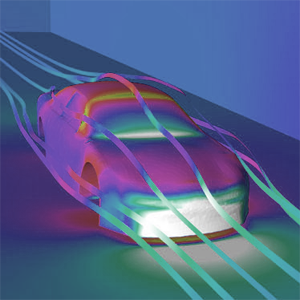 From the definition above it is clear that my experience as a videogame programmer played a major role in becoming an expert in the computer simulation field.

I faced, for the first time, the problem of modeling real-world physics when I was very young, when I was (successfully) developing a clone of Atari’s “Lunar Lander” for the Commodore 64. Computers were very slow, those days, so even a first-approximation of the simple motion of a ship landing on the moon was challenging! But, as soon as more CPU power began to be available on the market, more and more games that aimed at reproducing in some ways the real world appeared on the shelves.

During that period, being a motorsport fan, I started to investigate the idea of a realistic computer simulation of a racecar. I was fascinated by Papyrus’ “Indianapolis 500”, a real masterpiece, and I wanted to be able to program something that can at least play in the same league; so, I started to learn as much as I can about automotive physics – tyres, suspensions, aerodynamics, engines.

My researches on the topic, coupled with my engineering studies, eventually became the AVC project, a set of industrial-strength algorithms that can accurately simulate quite every component of a real racecar. AVC was a never-ending project, it was continually updated and upgraded (I’m still working on it, although not fulltime); during the years, it became the foundation of some real-life applications and the engine of some racing simulators (most notably, the “Virtual Grand Prix” series).

I started to study computer simulation in the automotive field, but I’m now looking at it as a really multidisciplinary matter. Simulations can be used in many fields and are useful to predict things, conduct (virtual) experiments, investigate new ideas, accelerate production, increase safety, and so on.

Computer simulation is a thing that fascinates me – and probably will for the rest of my life.